Indonesia is a Real World map introduced in Age of Empires II HD: Rise of the Rajas. It depicts the area around today's Indonesia, with the main island on the map, Borneo, taking up more than half of the land mass.

Indonesia is a very special map. Most of the map is covered with shallows. As a result, almost the entire map is an open battlefield in which land units and warships interact. There is not much wood available on the map, so in later stages of the game, Villagers have to walk across the shallows to gather wood from mangrove trees. Gold and Stone Mines also sit on the shallows.

The land is covered with rainforest. In the shallows, there are mangrove trees, patches of grass, and also some fish.

Water Buffaloes and Rhinoceroses are the wildlife available on the map, but only in the player's starting positions.

Shallows cover most of the map.

Wood is found in the shallows, and even Mines.

The landmass is covered with rainforest. 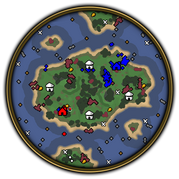 Indonesia is one of the new maps in Age of Empires III: Definitive Edition.

It consists of one large tropical island with four native settlements (Jesuit or Sufi) with most of its resources. Additional islands can be settled around the main island.