The Real World map Indochina depicts the area of the mainland of Farther India, with the southern part of the Malay Peninsula missing.

The jungle on the map is quite thick, but there are also a lot of open areas that can lead to pitched battles. The main battle is most likely taking place on the mainland, but control of the sea can prove useful, as a lot of players have their starting positions close to the shore.

The entire map is covered with rainforest trees, and there are Water Buffaloes and Rhinoceroses as wildlife on the map. On the shore, there are Mangrove Trees.

The map is covered with rainforest.

The wildlife on the map

A player's starting position with a bounty of resources surrounding them

The Age of Empires III version is included in The Asian Dynasties expansion, as one of several Asian maps.

Players initially start opposite each other, surrounded by the dense jungles of the peninsula and a single river which connects to the coastal waters. The environment of the map is similar to Borneo with dense groves of jungle found further inland. Herds of wild animals will be found gathering near the coast and central river of the map.

Utilizing the rich coastal waters will greatly benefit the player as well as the numerous treasures that dot the ocean, the central river can be bypassed by crossing areas of shallow water, of which there are two, the pathways can be effectively guarded by the use of navy.

A Jesuit Settlement found in the map

A Sufi Mosque found in the map

The coastal waters off the map are filled with abundant resources

Herds of Serow grazing near the central river

The central river of the map 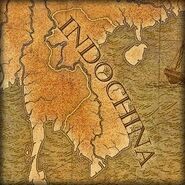 Indochina from the map selection menu
Community content is available under CC-BY-SA unless otherwise noted.
Advertisement