Amazonia
Andes
Araucania
Pampas
The Incas are a minor Native American tribe in Age of Empires III. Like all natives, they can be allied with by building a Trading Post at their Trading Post site.

The Incas are one of the two new major civilizations for Age of Empires III: Definitive Edition. They are, however, still available as an allied Native American tribe in the Andes - Upper map.

Inca technologies are some of the best in the game. They focus on boosting an allies economy, and troop training and movement speed.

The Incan Huaminca's dialogue is reused for Inca military units in Age of Empires II HD: The Forgotten.

An Inca settlement prior to a Trading Post being constructed 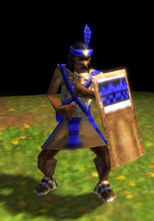 The Inca's history portrait
Add a photo to this gallery
Retrieved from "https://ageofempires.fandom.com/wiki/Incas_(minor_native)?oldid=290535"
Community content is available under CC-BY-SA unless otherwise noted.