Improved Bowman is a unit in Age of Empires. Note that it is not an upgrade of the Bowman, since a new tile slot appears once the "upgrade to improved bow" is researched. Improved Bow must be researched at the Archery Range before they can be created.

The Improved Bowman is not generally used in combat, since most civilizations that can train this unit can improve it to Composite Bowmen. Improved Bowmen have more hit points, attack, and range than the Bowman, but still need to be upgraded to compete with other Bronze Age units. Their primary role in combat is taking out Stone/Tool Age infantry such as the Axeman.

"The simple bow was improved by using better materials and by better training. Employing better wood or strips of laminated wood increased the tensile strength of the bow, increasing power and thus range. Arrows were improved also by such changes as metal arrowheads. In modern times, hundreds of bronze arrowheads were recovered from an archaeological excavation of the battlefield at Thermopylae. On this site a Spartan force under Leonidas had perished under a hail of Persian arrows after delaying the huge Persian army for many days." 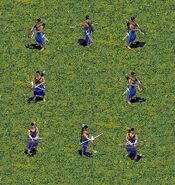 A group of Improved Bowmen, facing all possible directions. 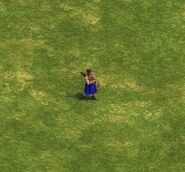 An Improved Bowman in the Definitive Edition
Add a photo to this gallery
Retrieved from "https://ageofempires.fandom.com/wiki/Improved_Bowman?oldid=277211"
Community content is available under CC-BY-SA unless otherwise noted.