Speeds up construction and training times

45 seconds
Imperial Examination is a Chinese Heroic Age god power in Age of Mythology: Tale of the Dragon that is available to worshipers of Dabo Gong. When cast, it speeds up the player's building construction speed by 40% and unit training times by 40% for a duration of 45 seconds.

Imperial Examination offers numerous ways for the player to gain the upper hand during a game. For example, it speeds up construction which is useful when constructing the buildings of the Heroic Age onward with high hit points (such as Castles and Wonders). Worshipers of Fu Xi will find it especially useful when used in combination with blessed construction. and technology research times.

Additionally, unit training speed is also increased, meaning the player can overwhelm enemy towns by constructing military buildings near them and pump out soldiers at great speed. The increased training speed applies to economic units like Peasants as well. Therefore, the player should consider researching Landlord Spirit first to train as many Peasants as possible.

The imperial examinations were first instituted by the Han dynasty as an effort to put effective administrations in positions where they could do the most civic good, and were accompanied under the emperor Liu Ch'e by the foundation of state universities to train people for government service. It was an efficient means to determine the best leadership possible for local rule in an empire as vast as Han China. However, all assigned positions were subject to approval by the emperor, and he did not always abide by the scores on the page. Zhong Kui received the highest score possible on the imperial exams, but was rejected by the emperor for his ugliness. However, the benefits of a good test score might extend beyond the mortal realm: when Zhong Kui committed suicide and wound up in Hell, his high marks on the exam assured him a leadership role in Hell's bureaucracy overseeing all the ghosts. 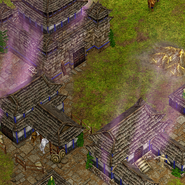 Imperial Examination in effect
Add a photo to this gallery
Retrieved from "https://ageofempires.fandom.com/wiki/Imperial_Examination?oldid=276608"
Community content is available under CC-BY-SA unless otherwise noted.