The Imperial Camel Rider (called Imperial Camel before the Definitive Edition) is the second unique unit of the Indians in Age of Empires II: The Forgotten. It can be trained at the Stable once the Imperial Age is reached. It is an anti-cavalry unit.

Unlike most unique units, Imperial Camel Riders do not have an Elite version, as they are already a final unique upgrade.

Imperial Camel Riders are one of the most versatile and powerful cavalry units in the game due to their variety of uses in the battlefield, and given the number of advantages they have compared to ordinary cavalry. Besides having an attack bonus against other cavalry units, they have decent attack, high hit points, fast speed, are cheaper than Knights, and have average armor (their original armor is 0/0 but the Indians' civilization bonus gives them +1 pierce armor from the very beginning. However, in update 42848 of the Definitive Edition, the pierce armor bonus was increased to +2 and extended to the Scout Cavalry line, but with Plate Barding Armor removed, which means that they get the same pierce armor as the Heavy Camel Riders of other civilizations, while also having less melee armor). Due to the Indian team bonus, they also have +4 attack against standard buildings, which makes them a fairly good substitute for siege weaponry. They can easily kill Paladins in one on one combat and can also defeat War Elephants in small groups.

As the Indians lack any unit from the Knight line, Camel Riders are a vital part of their armies for a fast, yet fairly resilient unit. They can be used as a shield for weaker units, while still being able to slaughter archers and cavalry. However, they are not as effective against Cataphracts, whose special resistance negates most of the bonus damage from the Camel Riders. Although they have an attack bonus against buildings, their low pierce armor means they should not deal against any of defensive structures on their own, especially in The Forgotten.

The Imperial Camel Rider is a well-rounded unit, and is able to handle almost any unit, even infantry, but while it can defeat even Halberdiers one on one, it is not cost effective enough to send them against a group of any kind of pole armed infantry because they can deal heavy damage even without defeating the Camel Rider force.

As Imperial Camel Riders are unique to the Indians, only technologies that are available to them are shown in the following table: 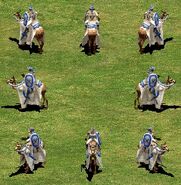 Imperial Camel Riders in The Forgotten, up to patch 3.5 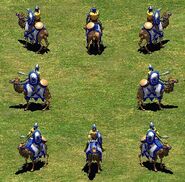 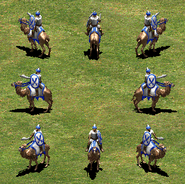 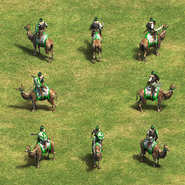 A group of Imperial Camel Riders in the Definitive Edition

Official preview when the Indians were still in development, showing the original design for the Imperial Camel Rider before it was reskinned