13 feet
The Immortal is one of the Chinese hero units in Age of Mythology: Tale of the Dragon. Immortals are unique as they have both a melee and a ranged attack and will use whichever weapon is best suited for their opponent. Like other Heroes, Immortals are strong against myth units.

Immortals use melee attack against the following units:

Immortals use ranged attack against the following units:

Fu Xi allows all eight Immortals to be trained as early as the Archaic Age.

Being Hero units, they are necessary in order to combat enemy Myth Units, but also in order to collect Relics (particularly since Monks are unable to pick them up).

In comparison to other, similar mass-trainable Heroes, such as the Hersir, Immortals excel as far as combat is concerned. Unlike other Heroes, they have two attacks, a melee that causes melee damage, and a ranged one with pierce damage and 14 range. This makes them the most adaptable Hero unit in the game, as they will choose whichever weapon causes the most damage, depending on the target's resistances. Combined with the worship of Chang'e and Zhong Kui, Immortals can become even more versatile, as they will combine regeneration with better speed and an even better bonus against Myth Units.

They are especially dangerous against flying units, as their substantial attack bonus (especially with Demon Slayer researched), combined with their decent attack, can spell doom to flying scouts, such as Ravens and Pegasi, whereas a group of 2-3 Immortals can easily fell even more powerful units, such as Stymphalian Birds and Phoenixes. Their stats are decent in comparison to Priests' and Hersirs, but Immortals also have two notable drawbacks: they are available solely to the Town Center and Castle, meaning that their production can halt down Peasant production, and have a build limit of only 8. This means that they cannot be massed and should therefore not be trained without purpose and reason.

"Great feats and extreme acts of devotion, fervor, or piety might be enough to grant mortals the opportunity to ascend to a higher plane of immortal existence.

The Eight immortals of the Taoist pantheon were a diverse group of men and women who achieved immortality through fasting, kindness to the poor, and sometimes divine intervention. Lan Caihe even ascended to heaven while totally drunk after inadvertently climbing onto a celestial swan. Sun Wukong was so amused that he granted La Caihe 500 years of his magical powers."
—In-game history section 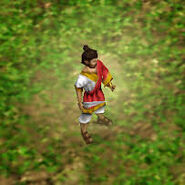 An Immortal in-game
Add a photo to this gallery
Retrieved from "https://ageofempires.fandom.com/wiki/Immortal?oldid=284191"
Community content is available under CC-BY-SA unless otherwise noted.