The Hussar is a melee heavy cavalry unit in Age of Empires III that can be trained at Stables, Forts, and Galleons/Fluyts/Steamers.

Hussars are available to the United States and European civilizations except Germans, John Black's Mercenaries (both of which have Uhlans instead), and Russians (who have Cossacks instead).

Hussars are the basic cavalry for most of the European civilizations. They have the most hit points of all basic cavalry, but otherwise lack distinguishing characteristics.

They are effective at raiding Settlers due to their speed and high damage. Due to Settlers' 20% melee resistance, 7 hits are required to kill a Settler; a raiding party of 10 is usually sufficient.[1] As with all units, be sure to queue one up as soon as the Stable finishes to start the training, adding more units as resources become available towards the completion of the group's training.

Hussars, like all melee cavalry, are effective against frail ranged infantry, which cannot withstand melee combat. Hussars' speed helps in getting in close with small numbers of early artillery. However, Hussars are weak against heavy infantry and light cavalry. Because Hussars are quite fast, it is often better to run away from groups of those units and work with nearby infantry so that each unit can cover for the other's weakness.

Hussars tend to be used less as the primary unit of an army in the late game because Dragoons and massed Musketeers can reach a critical mass with enough firepower to significantly weaken their force without even giving them a chance to cause damage. They are also not as well suited as the Cuirassier for dealing raw melee damage against large groups of vulnerable infantry or for simply overpowering heavy infantry because they lack the latter's Area of Effect attack. They can, however, still be useful to soak up initial artillery/Skirmisher fire in large battles to protect infantry or used for flanking to destroy expensive enemy artillery.

The Spanish can use unction to boost their Hussars in combat, providing a sizable damage increase.

3.0
The Hussar of Death is a variant of the Hussar unique to Chile, which have twice the attack of regular Hussars.

3.0
The Magyar Hussar is a variant of the Hussar unique to Hungary, which have twice the hit points of regular Hussars.

Magyar Hussars' availability is determined by the base European civilization:

The United States can also acquire Magyar Hussars through the "Kovat's Legion" Home City Card, which ships 9 Magyar Hussars and allows them to be trained at Forts. These Magyar Hussars are different from those gained through the revolt to Hungary, as they cost 180 food, 120 coin, have a train time of 99 seconds, an XP bounty of 30, and can only be trained at Forts. Additionally, this variant is defined as a separate unit, unlike the Hungarian variant which is a regular Hussar with +100% hit points. Due to this, most upgrades that increase hit points are twice as effective on them as they have a higher base stat. 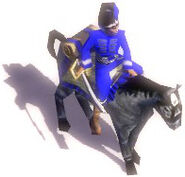 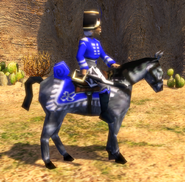 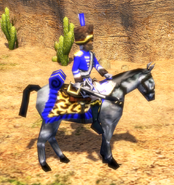 The in-game stats of an Imperial Life Guard (British Hussar)

A painting of a group of Napoleonic Hussars 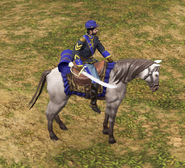 An in-game Imperial Hussar model of the United States civilization. 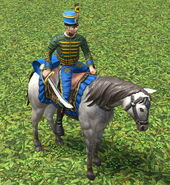