Age of Empires Series Wiki
Register
Don't have an account?
Sign In
Advertisement
in: Age of Empires II, Scouts, Light cavalry,
and 2 more

The Hussar is a light cavalry unit in Age of Empires II: The Conquerors that can be trained at the Stable once the Imperial Age is reached. They are quick, have decent pierce armor and high Line of Sight as well as an innate resistance to conversion and an attack bonus against Monks.

The * indicates that the civilization can fully upgrade their Hussars, i.e. gets Blast Furnace, Plate Barding Armor, Bloodlines, and Husbandry. Faith and Heresy are not taken into account because they only contribute to their combat strength in a very situational manner.

The ^ indicates that the civilization has at least one civilization or team bonus or a unique technology that benefits the combat strength of the Hussar.

The ‡ indicates Hussars were previously available for this civilization.

The Hussar upgrade's main advantage is the extra 15 hit points after upgrading, as none of its other listed stats like armor or attack damage change. However, the Hussar and Light Cavalry have two little combat differences not displayed in game. Firstly, Hussars have an attack bonus of 12 against Monks, 2 more than Light Cavalry. Secondly, Hussars also have a slightly higher attacking speed, attacking once every 1.9 seconds instead of every 2.0 seconds a Light Cavalry needs. Due to their faster attack, a Hussar without Bloodlines can defeat a Light Cavalry with Bloodlines, despite having a 5 hit point disadvantage.

At first glance, it is easy to dismiss the Scout Cavalry line's usefulness as combat units. But the Hussar's main advantages are its speed and cheapness. Hussars can be used to skirmish small towns and small armies before they can become a real threat, they can defend against small attacks from siege weapons and are adept at destroying small armies of archers since they move fast and have decent pierce armor. Hussars are also the mainstays of cavalry civilizations when gold is scarce or runs out. Because of their food cost, they are considered "trash units", and as such, they became especially important in the late game when the players must rely on their wood and food economy. They form a classic tactical rock-paper-scissors with other trash units by countering Skirmishers and being countered by Pikemen.

A preferred combination for the Cumans, Huns, Hindustanis, Magyars, Mongols, Saracens, Tatars, and Turks is the pairing of Hussars with Cavalry Archers. While a few other cavalry- and/or archer-based civilizations can utilize this as well, it is not as effective for them. Arguably, it is the signature attacking technique of the Mongols, since in addition to faster attacking Cavalry Archers, their Hussars have 30% more HP. Likewise, the Huns have cheaper Cavalry Archers and their Hussars are created quicker, and the Cumans have the fastest Hussars and the fastest Cavalry Archers (and both are created extremely fast thanks to Steppe Husbandry, making the pairing totally a viable strategy). The Indians, Tatars and Turks can also use this strategy, thanks to their bonuses and unique technologies that make them more resistant and tanky in combat. Since Hussars only cost food, precious gold can be invested in Cavalry Archers and siege weapons to create a mobile yet devastating force. The Hussar's contribution to the pair mainly consists of neutralizing Skirmishers, siege equipment, and Monks. They can also act as cheap cannon fodder to engage and block infantry, heavy cavalry, and Camel Riders, while the Cavalry Archers pick them off safely, using the cover.

The Berbers have the second cheapest Hussar in the game, thanks to the 20% discount on Stable units, costing only 64 food, making them a great choice for the late-game. They are usually paired with the Genitour and Camel Archer to cover each other's weaknesses, making them a dangerous army.

With a 50% food discount for Blacksmith technologies, and also all being researched 80% faster, plus having the Stirrups technology to boost the attack speed by 33%, the Bulgarians get, by far, the strongest Hussars in the game, resulting a extremely powerful cavalry unit to raid and disrupt enemy economy, and fending off other units much better than other Hussars.

Despite lacking Bloodlines, the Burgundians can have the second-fastest appearance for Hussars, thanks to the civilization bonus which makes all Stable technologies 50% cheaper. In combination with the economic upgrades researched one age earlier than other, the Burgundian Hussar spam cannot be underestimated, especially in the early Imperial Age.

The Burmese Hussars are the most effective against archers, thanks to the Manipur Cavalry technology, which grants all cavalry units +5 attack against archers. As a result they can kill most archers in one less hit.

Despite lacking Husbandry, the Cumans have the fastest Hussars in the game, thanks to their civilization bonus which makes all cavalry move 15% faster. They have also the most easily massed Hussar once Steppe Husbandry is researched, which makes them train 100% faster. They are key units for the Cumans, especially when paired with the already fast-moving and fast-trained Cuman Cavalry Archers, but more particularly with the Kipchak, resulting in a very deadly mobile army.

Despite lacking Blast Furnace, the Gurjaras have the most bonus against Monks. It significantly gets an advantage against Aztec Monks, who add hit points by researching technologies. For example, if the Aztecs only researched Sancinty, then common Hussars will need one more hit than Gurjaras, which will get 27 damage. And if the Aztecs researched every technology except Herbal Medicine, Heresy and Faith, the Gurjaras only need 3 hits to kill it. When combined with a Polish and Hindustan ally, their team bonuses will also affect it, which compensates for the lack of Blast Furnace. They have the cheapest Hussar, since Kshatriyas gives -25% food cost. As a result, they only need 60 food to train it.

The Huns come up with the second-fastest-trained Hussars in the game as a result of their team bonus which makes the Stables work 20% faster. They are usually paired with their cheaper Cavalry Archers, ending up with a numerous army.

The Hindustanis have +2 attack against buildings as a team bonus for themselves. As a result, they have a minor advantage at taking down buildings, while also having all upgrades for their Hussars.

The Magyars have the third cheapest Hussars in the game, costing only 68 food, thanks to the 15% discount for the Scout Cavalry line. They also have the attack upgrades for free, saving a good amount of resources. They are common to use with their exceptional Cavalry Archers, especially in the late Imperial Age.

The Mongols also lack Plate Barding Armor, but are compensated with extra 30% hit points, making them the most resistant Hussar in the game with 118 hit points. They are especially strong in melee combat, but weaker against ranged units. They are the most common choice to act as damage soaker for the already powerful Mongol Cavalry Archers, but mostly specifically with the Mangudai, resulting in one of the deadliest armies in the game.

The Tatars have the most armored Hussars, thanks to the Silk Armor technology which increases melee and pierce armor to 4 and 7, respectively. They also deal 50% more damage from higher ground. Combined with the armored Tatar Cavalry Archers, the Tatar Hussars are a tough force to fight off, and they excel at raiding and taking down archers.

The Turks may have the most easily used Hussars in the game, with also the fastest appearance in the game, thanks to the free Light Cavalry and Hussar upgrades. They also get +1 pierce armor, resulting in a very quick and effective option to raid and fend off archers. Turks are heavily dependent on Hussars, as they cannot upgrade their Skirmishers, so end up very prone to archer civilizations, which Hussars can make up for. Like the Tatars, the Turks have also very resistant Cavalry Archers, resulting in an appealing combination.

The Scout Cavalry line, with the Hussar on the right

A group of Hussars 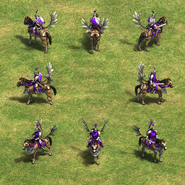 A group of Hussars in the Definitive Edition

A render of the Hussar model