The Huskarl is the unique unit of the Goths in Age of Empires II. It is an infantry unit that is almost immune to archer fire.

Huskarls can be upgraded to Elite Huskarls in the Imperial Age.

Huskarls are infantry units that have decent attack and speed, but their biggest asset is their high base pierce armor. This makes them one of the best raiding units in the game, and an absolute nightmare for archers (they even deal a large amount of bonus damage vs archers). Their pierce armor, base bonus attack vs buildings and the Goth anti-building infantry civilization bonus means that Huskarls can destroy a Castle with minimal effort.

With 0 base melee armor and relatively mediocre HP, they are not recommended for any melee combat except vs Camel Riders, Light Cavalry, Halberdiers, or Eagle Warriors (they lose one-on-one against Mongol Hussars). However, the Goths are able to field Huskarls very cheaply and rapidly, so they may still be able to overwhelm standard melee units (such as Paladins or Champions) by sheer numbers.

Melee units with higher armor (Boyar, Teutonic Knight) or an attack bonus against Huskarls (Jaguar Warrior, Cataphract, Samurai) should generally be avoided. War Elephants and Battle Elephants can also decimate them thanks to their high HP, powerful attacks, and splash damage, but must be wary of Halberdiers that are usually a part of a Goth player's army composition. Ranged melee units such as Throwing Axemen, Gbetos, or Mamelukes are also effective against Huskarls.

Onagers can also be a threat since they deal high melee-type damage and large area damage. Scorpions, however, are not effective since they deal mediocre pierce damage, and can be easily handled if not protected well. Hand Cannoneers and Slingers can be effective against Huskarls due to their attack bonus and range, but as both of the units take huge bonus damage themselves (an Elite Huskarl kills them in two strikes), they must be massed or protected by melee units in order to be effective.

As Huskarls are unique to the Goths, only technologies that are available to them are shown in the following table: 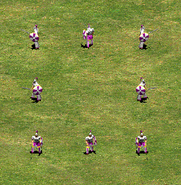 Huskarl in the Definitive Edition.

Huskarls are very effective against archers. 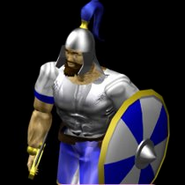 A render of the Huskarl model 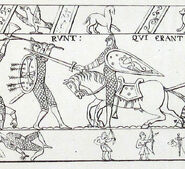 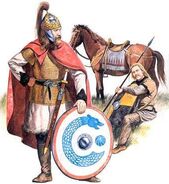 Huskarl in the HD Edition and Definitive Edition