The Huron Mantlet has no bonuses versus enemy units, but possesses good siege attack and outstanding durability versus enemy ranged units. Its usefulness is diminished against melee cavalry and heavy infantry. Huge numbers of Mantlets can be trained with the appropriate upgrade and possession of more than one Trading Post site.

"The Huron, also known as the Wyandot, probably numbered between 30,000 and 45,000 in the early 1500s. Even though they generally had good relations with neighboring tribes, their rivalry with the Iroquois did erupt into sporadic warfare. They lived in well-fortified villages with populations over 1,000 and lived in large, communal longhouses up to 200 feet long.

Like other Native peoples, the Huron needed siege weapons when they battled rival villages. One technique they developed was the mantlet, similar in function to those used in Roman and medieval armies. Two warriors would carry the mantlet (essentially a moveable wooden wall) to protect themselves from enemy arrow or musket fire until they reached their enemy’s town walls, where the mantlet was used as a ladder to scale the walls and breach the town." 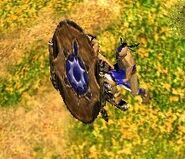 The Huron Mantlet as it appears in-game

The Huron Mantlet's history portrait
Add a photo to this gallery
Retrieved from "https://ageofempires.fandom.com/wiki/Huron_Mantlet?oldid=265065"
Community content is available under CC-BY-SA unless otherwise noted.