Huayna Capac has a calm and measured demeanor. He frequently refers to himself in the third person in conversation (Illeism) instead of first person as is the social norm. He seems to believe in sacrifices, similar to Cuauhtemoc.

He is the strongest Native American AI in the Definitive Edition on average. In the early game, Huayna Capac is weak, as he often relies on only one War Hut, which limits his military production and leaves his base vulnerable to enemy attacks. However, he improves greatly once he hits the Fortress/Industrial Ages when he expands to multiple production buildings, including Strongholds, and attempts to overwhelm the enemy with vast hordes of infantry. Huayna Capac will utilise all units available to the Incas, but is particularly fond of Chimu Runners, Jungle Bowmen, Plumed Spearmen, and Bolas Warriors. Macemen and Huaracas are produced in lesser quantities. 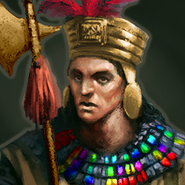 Wikipedia has an article about:
Huayna Capac
Community content is available under CC-BY-SA unless otherwise noted.
Advertisement