The Howdah is an Indian is a ranged light cavalry in Age of Empires III: The Asian Dynasties that is unique to the Indians and can be trained at Caravanserai and Galleon, as well as the Agra Fort wonder once it is upgraded to Delhi Gate, once the Fortress Age is reached. It is the strongest ranged cavalry unit in the game.

Howdahs are elephants that carry a howdah - which gave the units its name - on their backs, with a gunner in the howdah. The man in the howdah uses his gun to shoot at units at a fairly good range and with a high attack, making it the most powerful ranged cavalry in the game. However, it costs a lot of resources and population, which is its main disadvantage. They are similar to German War Wagons, but have a ranged resistance.

Note: Elephant population can be decreased by a single point through use of the Professional Handlers Home City Card.

Howdah pack the toughness of a War Elephant with an extremely powerful ranged attack able to kill most units in only one or a few shots. Howdah has a large amount of hit points, and a huge ranged attack. They can kill any hand cavalry unit in only a few shots, and are incredibly durable, but they are very slow for ranged cavalry units, and are hard to micromanage, balancing out their incredible military power. The Howdah is an excellent counter to Hand Cavalry and artillery, and does well against most units, although they should stay out of melee combat with Heavy Infantry, and should usually stay away from ranged infantry altogether. The Howdah also has a quite high siege attack for a ranged Cavalry unit, and a group of them can do a fairly good job of taking out buildings, but this is offset by their huge cost and population usage.

Howdahs can be overwhelmed by cavalry if they are not properly micromanaged; however, they do have one unique attribute shared with only the Yojimbo: a splash damage when set into melee mode. If Howdahs become surrounded by cavalry, activating melee mode allows them to attack multiple units simultaneously and increases the rate of fire. Coupled with their high damage and multipliers, this allows them to defeat large numbers of cavalry, similar to Doppelsoldners or Ronin. This splash damage can also be effective against infantry, artillery, or Villagers, but it is usually better to attack at range.

Compared to Zamburaks, Howdahs have a few distinct advantages. Firstly, they have vastly superior range, allowing them to target units from a safer distance. As the Indians lack Ranged Cavalry Caracole, they cannot even bring Zamburaks up to the standard 14 range of Dragoons. Furthermore, Zamburaks are incredibly frail, and are unable to withstand artillery fire. A few Heavy Cannons will easily clear up Zamburaks, whereas Howdah can withstand an incredible amount of damage. Finally, Howdahs train much quicker, by stacking Riding School, Tame Elephants and Terror Charge. This is of course compounded when pure firepower is taken into consideration; 5 Zamburaks take longer to train than 5 Howdahs, and 5 Howdahs are considerably more powerful.

The Howdah is automatically upgraded to Disciplined (+20% hit points and attack) in the Fortress Age.

Imperial Service (passive): The Mansabdar Howdah increases the hit points and attack of Howdahs in a radius of 24 around them by 10%.

As (Mansabdar) Howdahs are unique to the Indians, only technologies that they have access to are shown in the following table:

As (Mansabdar) Howdahs are unique to the Indians, only their cards and other civilizations' TEAM cards are shown in the following tables: 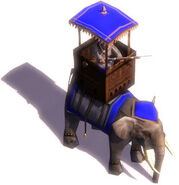 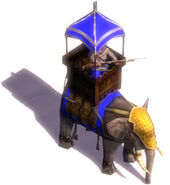 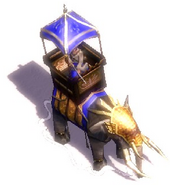 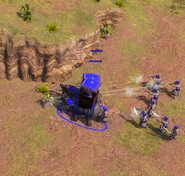