Battle Elephants +1/+1 armor
Howdah is a technology in Age of Empires II HD: Rise of the Rajas that is unique to the Burmese and can be researched at the Castle. Once researched, it gives +1 melee armor and +1 pierce armor to Battle Elephants.

Burmese Battle Elephants with Howdah become more resilient to enemy attacks. As Burmese also have almost all improvements for Battle Elephants (only lacking Heresy), this further ups their capabilities. The technology itself may be treated as a Blacksmith upgrade; but even so it does not cost gold (unlike Chain Barding Armor and Plate Barding Armor), so in many circumstances, it should be researched first.

The additional armor provided by the technology provides the Burmese army with the best arrow-soaking Battle Elephants in the game with 9 piece armor when fully upgraded. This is useful for a civilization with a weak Skirmisher line due to missing both Leather and Ring Archer Armor. The other unique technology, Manipur Cavalry, provides bonus attack against archer units that makes Burmese cavalry, including their Howdah-augmented Battle Elephants, a serviceable response to enemy archers.

Howdah (Hindi: हौदा, Arabic: هَوْدَج, lit. "camel litter"‎) is a seat or platform for one or more persons placed on the back of an elephant. It is commonly used by soldiers or royal family members riding elephants in South[1] and Southeast Asia.[2] 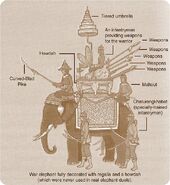 A Siamese War Elephant, the howdah is behind the armed rider