Danish Straits
England
Ireland
Low Countries
Saxony
Scotland
The House of Hanover is a European Royal House in Age of Empires III: Definitive Edition - Knights of the Mediterranean. Like all minor civilizations, they can be allied with by building a Trading Post at their Trading Post site. 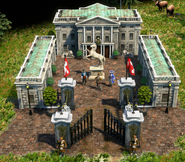