In Age of Mythology, the House is built by the Greeks, Egyptians, Norse and Chinese. Though they have different designs, houses are similar for each culture, with Norse houses being slightly weaker.

Houses increase the number of population slots available to a player; each house supports ten population. Players can only have ten Houses at any one time. Together with the starting Town Center, this gives a total of 115 slots. The only way to acquire more population than this is to build further Town Centers on Settlements.

Atlanteans build Manors instead of houses. These support twenty population, but only five can exist at a time.

When agriculture made possible a less nomadic lifestyle, humans began creating more permanent living quarters near their farms, rather than occupying transitory camp sites near hunting grounds or natural shelters like caves. Well built housing improved the quality and longevity of life. 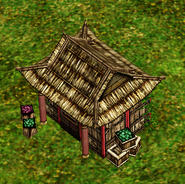 A Norse House in the Mythic Age
Add a photo to this gallery
Retrieved from "https://ageofempires.fandom.com/wiki/House_(Age_of_Mythology)?oldid=283421"
Community content is available under CC-BY-SA unless otherwise noted.