Age of Empires Series Wiki
Register
Don't have an account?
Sign In
Advertisement
in: Age of Empires II, Dawn of the Dukes, Siege equipment,
and 2 more

The Houfnice is the second unique unit of the Bohemians in Age of Empires II: Definitive Edition - Dawn of the Dukes. It can be trained at the Siege Workshop in the Imperial Age once Chemistry is researched. As an upgrade to the Bombard Cannon, it is a long-ranged gunpowder siege unit.

Unlike most unique units, the Houfnice do not have an Elite version, as they are already a final unique upgrade.

The Houfnice can take up to 23 fully upgraded Arbalester bolts, compared to 16 for a Bombard Cannon. It also has a 70% larger blast radius, making it more effective against massed infantry and foot archers. It flips the trade against Siege Onagers, which kills the Houfnice in two shots (one shot if 4–5 extra Siege Onager projectiles hit the Houfnice with an attack order (not attack ground), depending on Chemistry) but only needs one Houfnice shot to be killed (guaranteed on attack ground). It is the other way around for ordinary Bombard Cannons.

Its higher pierce armor also means it takes 1 damage from fully upgraded Elite Skirmishers, rather than 2 damage like a Bombard Cannon would.

Although not defined in game, the firing arc of the Houfnice appears to strike much lower than that of a Bombard Cannon, and far lower than that of a Trebuchet. This allows Houfnice units to destroy moving siege weapons as long as they are directly in front of them; their cannonballs will strike the unit's hitbox and do full damage, never reaching their attack point.

The Czech word houfnice is the origin of the German and English word howitzer. It derives in turn from the word houf, meaning crowd.

In the Hussite Wars of the 1420s and 1430s, the Czechs used short-barreled houfnice cannons to fire at short distances into crowds of infantry, or into charging heavy cavalry, to make horses shy away. 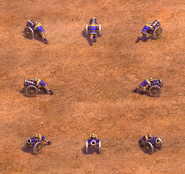