The Hot Air Balloon is a unique unit in Age of Empires III that may be created via special Home City Cards, either temporarily or permanently.

The Hot Air Balloon is an invulnerable, attack-less exploration unit that hovers above the ground. There are two types of balloons :

The balloons' Line of Sight can be increased through use of Town Watch and the Spanish card TEAM Inquisition.

"Joseph and Etienne Montgolfier are to hot air balloons what Orville and Wilbur Wright are to airplanes. They believed that their balloons were held aloft by smoke, burning hay and even shoes to keep early balloons up. Within just a few years, balloons appeared on the battlefield to scout and observe enemy movements and deployments." 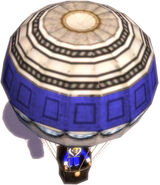 An image from The WarChiefs cover: A Hot Air Balloon flying above a map set in the Northwest Territory.

The two Hot Air Balloon models, from left to right: Hot Air Balloon and Advanced Hot Air Balloon
Add a photo to this gallery
Retrieved from "https://ageofempires.fandom.com/wiki/Hot_Air_Balloon?oldid=261494"
Community content is available under CC-BY-SA unless otherwise noted.