The Horse Archer is a fast ranged cavalry that can be made during the Iron Age in the Archery Range. Horse Archers are one of the more expensive archer units, but their decent attack, good range and, most importantly, high speed makes them one of the best units of the Iron Age.

Although only having a tenth of an Elephant Archer's hitpoints, the Horse Archer has more than double its speed. Having this key ability allows them to outmaneuver most units in open terrain. Under ideal conditions in one on one combat, horse archers dominate the field. As a result, this makes them a great choice in guerilla warfare. However, due to their fragility, their attacking potential becomes less powerful the more they are bunched together on the battlefield where they can be prime targets for siege weaponry that does area of effect damage. The Horse Archer can be upgraded to the more powerful Heavy Horse Archer.

Horse archers started to gradually replace chariot archers on the ancient battlefields from the Iron Age on. Two ranged cavalrymen had the firepower of a single Chariot Archer and could move faster on the battlefield. Also, a loss on the battlefield was of only one horse and the archer in contrast to the loss of a chariot, of the men on the chariot and often, of the horses.  The horse archers' use was gradually limited when many cultures, such as the Greeks made increasing use of heavy cavalry (such as the Companion cavalry), and skirmishing troops. The Chinese also built the Great Wall to protect themselves against these cavalrymen and other armies from the western steppes. 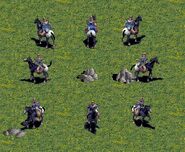 A group of Horse Archers.

A Horse Archer in the Definitive Edition
Community content is available under CC-BY-SA unless otherwise noted.
Advertisement