Hoplites are elite infantry units with a high amount of damage. They can easily bring units down, but are relatively slow and vulnerable to archer fire and conversion. Hence, they are best used in hand-to-hand combat. The Hoplite can be upgraded to the more powerful Phalanx, and finally to the Centurion, the most powerful elite infantry unit. The Greeks have the fastest Hoplites.

Hoplites are available to all civilizations except for the Persians.

"Greek infantry soldiers of the Classical Age were called hoplites, from the name of their large shields, called hoplons.  For battle they wore a cuirass (breastplate), helmet, and greaves.  They were armed with a long spear or pike and sword.  Hoplite armies fought each other hand-to-hand in the dense phalanx formation that faced the enemy with a bristling wall of spear points staggered at chest level.  Fighting at close range in such a formation required acommitment to training and discipline that became a way of life.  Hoplites were the best infantry units in the world for many centuries until being supplanted by the more flexible and functional Roman legionnaires."
—Age of Empires manual 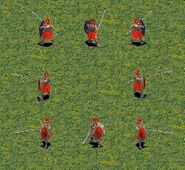 A group of Hoplites

An Hoplite in the Definitive Edition
Add a photo to this gallery
Retrieved from "https://ageofempires.fandom.com/wiki/Hoplite_(Age_of_Empires)?oldid=277758"
Community content is available under CC-BY-SA unless otherwise noted.