Age of Empires Series Wiki
Register
Don't have an account?
Sign In
Advertisement
in: Age of Empires III, Maps, The Asian Dynasties

Honshu is a map in Age of Empires III: The Asian Dynasties.

Honshu features one large land mass in the center of the map with multiple smaller islands on either side of the central mass, on this map players begin with a Dock Rickshaw and three Fishing Boats which, combined with the relatively rich coastal waters can provide a viable map for a water boom. This map also features water Treasures that can be collected without fighting any Treasure Guardians.

The two smaller islands are an essential asset due to their many gold mines and treasures.

A smaller mass of land can be found on either side of the central island and it houses a Trade Route as well as the rarest huntable animal in the game, the Giant Salamander.

Minor civilizations include a Zen Temple and a Jesuit Mission which provide among upgrades, Sohei Naginata and Conquistadors which can provide support against Cavalry and can both be located towards the middle of the central island. 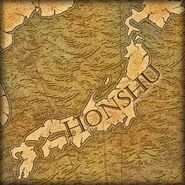 Map of Honshu
Community content is available under CC-BY-SA unless otherwise noted.
Advertisement