Age of Empires Series Wiki
Register
Don't have an account?
Sign In
Advertisement
in: Age of Mythology, Age of Empires III, The African Royals,
and 4 more

The Hippopotamus is a huntable animal in Age of Mythology and a Treasure Guardian and pet in Age of Empires III: Definitive Edition - The African Royals.

5-10
The Hippopotamus is a large, lumbering and rather dangerous semi-aquatic herbivore. In Age of Mythology it is a huntable animal that holds a lot of food. It will strike back if attacked and it is one of the toughest animals in the game, so several villagers are needed to hunt it safely.

The Hippo of Set is available to Pharaohs worshiping Set, and is one of the largest animals the Pharaoh can summon. 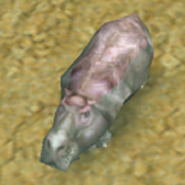 An in-game Hippopotamus in Age of Mythology