Age of Empires Series Wiki
Register
Don't have an account?
Sign In
Advertisement
in: Maps, Age of Empires III, The Asian Dynasties

The Himalayas is a random map in Age of Empires III: The Asian Dynasties. The mountains have a trade route that goes across the entire map. The cliffs around the settlement can be used for defensive purposes.

There are three Himalaya-themed maps in Age of Empires III: The Asian Dynasties: Himalayas, one of the three Silk Road variants, and Upper Himalayas.

Food can be scarce and far from the initial starting locations. Trees and wood are fairly common throughout the map, but in small numbers. Players start with Town Centers in close proximity to snowy forests, beyond of which lies a central valley with plenty of Silver Mines and herds of Ibex and Serows.

A Trade Route is found to the center of the map, dividing the map in two halves. There are three to five Trading Post sites available, depending on the map's size.

The key to this map is to hold a firm grip to the central resources (including the Trade Route), while simultaneously denying them from the enemies. At the meantime, it is recommended to aggressively restrict chokepoints close to enemies, not only to deny access to the central resources, but to also constrict them and force them to the defensive.

Natives can be found to the center of the map, with two native religious settlements available: the Udasi Temple and the Bhakti Temple. They lie on each side of the Trade Route, and one can be found near each player in 1v1 matches. 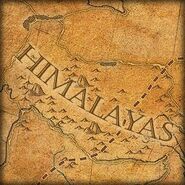 Wikipedia has an article about:
Himalayas
Community content is available under CC-BY-SA unless otherwise noted.
Advertisement