The Highlander is a mercenary in Age of Empires III. It is a stronger version of the Musketeer.

In some scenarios of the Act I: Blood campaign, a number of Highlanders, while they cannot be trained by Knights of St. John, accompany the knights, most likely because of the presence of Scottish knight hero Morgan Black. In Act III: India of The Asian Dynasties, the East India Company deploys Highlanders against the rebelling Indians.

The Highlander speaks Scottish Gaelic, a Celtic language, which is also spoken by Morgan Black. 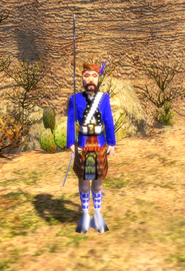 Highlander model
Add a photo to this gallery
Retrieved from "https://ageofempires.fandom.com/wiki/Highlander?oldid=295960"
Community content is available under CC-BY-SA unless otherwise noted.