Age of Empires Series Wiki
Register
Don't have an account?
Sign In
Advertisement
in: Haudenosaunee, Age of Empires III, AI personalities, The WarChiefs

Hiawatha (1525 - possibly 1595) was a legendary Onondaga or Mohawk leader and founder of the Haudenosaunee Confederacy. He is their AI personality in Age of Empires III: The WarChiefs. He is voiced by Kalani Queypo.

Hiawatha is generally believed to have been a real person, but the exact dates of his life remain debated. He is credited with persuading the Senecas, Cayugas, Onondagas, Oneidas, and Mohawks to become the five nations of the Haudenosaunee Confederacy.

Hiawatha's forces can vary, but he often prefers to train numerous Aennas supported by Tomahawks. During the Fortress Age, he will begin training Mantlets that have a high amount of health, good range and can be useful against ranged units, buildings and artillery, plus a moderate number of Kanya Horsemen and sometimes Forest Prowlers and Light Cannons. He may use Musket Riders in minority, and will rarely or never use Rams; Rams only appear via shipments. If he successfully establishes native alliances, he will be unleashing a number of native warriors along with his army.

In general, Hiawatha will try to fully upgrade around half of the unit types in his army, leaving the other half at their default level.

Hiawatha's defense will rely on the use of War Huts around his base, similar to Ivan's blockhouses. But unlike Ivan, whose blockhouses are never upgraded in the non-post Industrial/Imperial Age, Hiawatha can upgrade War Huts to Mighty War Hut upon reaching the Industrial Age. He also employs a specific defence policy, using masses of structures to create a trap for enemy forces. This often involves a combination of War Huts, Corrals, and a Siege Workshop placed closely together and facing the enemy in order to form a kind of mini-barrier. However, this isn't always effective, as it leaves the other sides of his town exposed, especially in open maps.

In the Definitive Edition, Hiawatha is considerably weaker, especially in the early game. His military will initially consist of Aennas, Tomahawks, and Kanya Horsemen. However, these units will typically be phased out as the game goes on in favor of Forest Prowlers and Musket Riders. 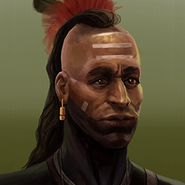