5
Henry V is a cavalry hero found in the Agincourt scenario in Age of Empires II: The Conquerors. He can also be found in the Scenario Editor. He is based on the King of England with the same name who is best known for his military successes during in his famous victory at the Battle of Agincourt (1415) which saw him come close to conquering France. He is represented by a Paladin but with better armor and hit points. As a hero, he cannot be converted and can regenerate health. 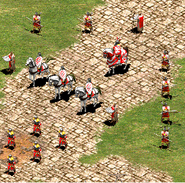 Portrayal of Henry V in the Agincourt scenario in the Battles of the Conquerors
Community content is available under CC-BY-SA unless otherwise noted.
Advertisement