18 feet
Heka Gigantes are multi-armed Atlantean myth units available at the Mythic Age of Age of Mythology through the worship of Helios.

Grand Slam: jumps and pounds the ground, causing 20 hack damage and knocking nearby enemy units away. Also leaves them vulnerable to attack. Deals ×3 damage to other Myth Units. Requires 15 seconds to recharge. The minor earthquakes causes the terrain to shift slightly.

Heka Gigantes are destructive against human soldiers and buildings alike. Their special attack is to smash the ground, causing minor earthquakes, which deals area of effect damage on all enemy units within the shockwave. It is useful for knocking away groups of units attempting to overwhelm it. Heroes are also affected by this ability and though they take much less damage, it does allow the four-armed giants to take them on in a pinch. But the Heka Gigantes will only last so long as they, like all Myth Units, receive bonus damage from heroes. For Oranos worshippers, the god power Shockwave can be a valuable addition when attacking with Heka Gigantes as it will further disperse enemy troops, making it easier for the player's own units to pick out their targets.

The most remarkable aspect of the Heka Gigantes is its four arms. When it takes a swing, it does not hit once, but twice per second. And since it deals crush damage, they can cause severe damage to buildings much faster than any siege weapon. Two Heka Gigantes alone are enough to take out a fully upgraded Town Center. Despite their slow speed, they fare better than siege weapons as the previously mentioned ability can help protect it from any enemy trying to harass it.

The Heka Gigantes are strong against human soldiers, sending them flying with their many-handed strikes. They are weak against heroes.

One hundred arms and fifty heads grew out of the shoulders of the Hekatonkheires. They were the sons of Oranos and Gaia and were so terrible that Oranos ordered them imprisoned in Tartarus. A fate he himself would suffer at the hands of his grandsons Zeus, Poseidon, and Hades. 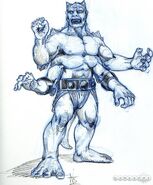 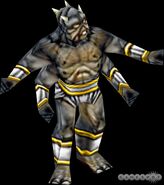 Heka Gigantes from further away

Heka Gigantes jumping in the air

Hoplites knocked back by Heka Gigantes

Wikipedia has an article about:
Hecatoncheires
Community content is available under CC-BY-SA unless otherwise noted.
Advertisement