The Heavy Scorpion is a light siege unit in Age of Empires II that can be trained at the Siege Workshop once the Imperial Age is reached. The Heavy Scorpion fires large arrow-like bolts. It is effective against groups of enemy units as the bolts cause damage to multiple units in a straight line. Unlike the Mangonel line, they do not damage friendly units. This can make all the difference in a pitched close quarters battle.

The * indicates that the civilization can fully upgrade their Heavy Scorpions, i.e. gets Siege Engineers. Faith and Heresy are not taken into account because they only contribute to their combat strength in a very situational manner.

The ^ indicates that the civilization has at least one civilization or team bonus or a unique technology that benefits the combat strength of the Heavy Scorpion.

Heavy Scorpions are effective against slower units such as infantry, archers, and Monks, where its slower-moving bolts have maximum efficiency. Heavy Scorpions perform poorly against Woad Raiders, Eagle Warriors, Huskarls, and cavalry, which can dodge its missiles and close the gap quickly. Heavy Scorpions, like most siege units, should be well protected, as their slow speed makes them very vulnerable to attack. They are often paired with Halberdiers to deal with enemy cavalry. This combination is especially prominent with the Bulgarians, Celts, Chinese, Ethiopians, Khmer, Slavs, and Teutons, as all have either a civilization bonus or unique technology that benefit the strength of both. 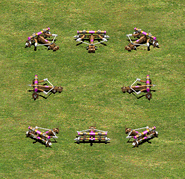 A group of Heavy Scorpions

The Heavy Scorpion (on the right) and its predecessor

The line of Scorpions, with the Heavy Scorpion on the right. In Age of Empires II: Definitive Edition.