The Heavy Cavalry Archer is a mounted archer unit in Age of Empires II that can be trained at the Archery Range once the Imperial Age is reached.

The * indicates that the civilization can fully upgrade their Heavy Cavalry Archers, i.e. gets Bracer, Ring Archer Armor, Thumb Ring, Parthian Tactics, Bloodlines, and Husbandry. Faith and Heresy are not taken into account because they only contribute to their combat strength in a very situational manner.

The ^ indicates that the civilization has at least one civilization or team bonus or a unique technology that benefits the combat strength of the Heavy Cavalry Archer.

Their armor gets upgraded through the archer line but in terms of bonus damage against them they count as both Archer as well as Cavalry. Additionally, along with the Mangudai, they are also counted in a special 'Cavalry Archer' class against which Elite Skirmishers and Camel Archers deal additional bonus damage. 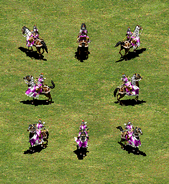 A group of Heavy Cavalry Archers 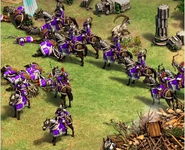 A render of the Heavy Cavalry Archer model 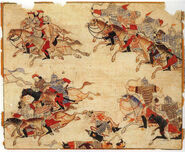