150 seconds
The Heavy Cavalry is a powerful cavalry unit in Age of Empires that can be trained at the Stable once the Iron Age is reached. As the upgrade of the Cavalry, it is much stronger in attack and bulk. Heavy Cavalry can be upgraded to Cataphracts once Metallurgy is researched.

Heavy Cavalry deal a +6 damage bonus against all melee infantry units except for Academy units. Thus, it can eliminate foot soldiers and Catapults very quickly, but are rather ineffective against Centurions, War Elephants, Ballistae, and Helepolises. 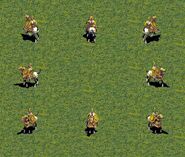 A group of Heavy Cavalry units. In appearance, they are identical to Cataphracts. 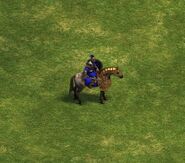 Heavy Cavalry in the Definitive Edition
Community content is available under CC-BY-SA unless otherwise noted.
Advertisement