The * indicates that the civilization can fully upgrade their Heavy Camel Riders, i.e. gets Blast Furnace, Plate Barding Armor, Bloodlines, and Husbandry. Faith and Heresy are not taken into account because they only contribute to their combat strength in a very situational manner.

The ^ indicates that the civilization has at least one civilization or team bonus or a unique technology that benefits the combat strength of the Heavy Camel Rider.

Camel Riders are essentially mounted Pikemen, doing bonus damage to their own kind as well as other cavalry units. Camel Riders have an advantage over Pikemen since they have enough speed to prevent cavalry from escaping, at the cost of higher food and gold costs. Using Camel Riders against civilizations that revolve around cavalry units, such as Berbers, Franks, Mongols, Persians, and Saracens often leads to great results. They can go head to head with other Imperial Age cavalry and defeat them in combat.

They are powerful against most cavalry, with the exception of Cataphracts, which are almost immune to the bonus damage from Heavy Camel Riders. Heavy Camel Riders are best used against melee cavalry, or to ambush groups of Cavalry Archers. Since they have a very low armor and base attack, they are not effective against anything else than cavalry, so it is wise not send them against archers or infantry, particularly Pikemen. Camel Riders are also ineffective against buildings and actually take extra damage from defensive ones. This was because Camel Riders and ships shared the same unit class before The African Kingdoms was released, so they were annihilated by defensive structures especially with Heated Shot. Units that dealt bonus damage against ships also dealt bonus damage against Heavy Camel Riders. This made Fire Ships, Galleons, Longboats, Mangonels, and Bombard Cannons surprisingly effective against them. With the release of The African Kingdoms, however, all camel units were moved out of the ship class and no longer take bonus damage from the above-mentioned units.

The Camel Rider line in the Definitive Edition, with the Heavy Camel Rider being the second from the right 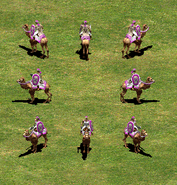 A group of Heavy Camel Riders 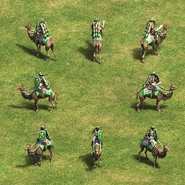 A group of Heavy Camel Riders in the Definitive Edition 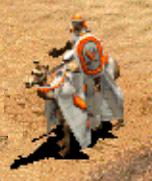