The Harbor is a military and economic building in Age of Empires II HD: Rise of the Rajas that is unique to the Malay and becomes available once the Castle Age is reached and Thalassocracy is researched. The Harbor is an improved Dock and does everything a Dock does, but has more HP, an increased line of sight and attacks enemies with arrow fire.

Like the Dock, the Harbor serves for both economy and naval warfare as it produces all kinds of vessels, while also being a drop site for Fishing Ships, Fishermen, and Trade Cogs. They must be used depending on the kind of map of the game; also, as this building has an attack and more hit points than the Dock, it may be used as part of a fortification, with the advantage that this building only costs wood.

When playing on maps like Archipelago or Islands, having Harbors is highly beneficial for Malay players, as they help to secure the shoreline, while at the same time they protect the Malay Fishing Ships and Fish Traps to some extent. That is especially important for the Malay, as they are a vital part of their economy, especially in these kind of maps. It can be a viable tactic to wall an island with Harbors as this makes it very difficult for enemy Transport Ships to approach the shore without needing to patrol the shoreline.

On maps like Coastal, Baltic, and Continental with important water bodies but where the settlements aren't separated by water, the use of Harbors can make a huge difference, as they can protect the shore, along with Castles and Towers. They also help to support their navy in many situations and protect the naval economy.

On maps like Rivers, Highland, or others that feature rivers and/or lakes, Harbors become part of the defensive structures as the rivers and lakes represent a barrier for land troops, and in this case using Harbors and naval units becomes more helpful to aid fortifications near the shoreline and the shallows which in this kind of maps are the only narrow points usable for land troops in order to cross rivers. Having Harbors along the rivers walling the entire coast of those water bodies helps to perform a turtle strategy.

It is important to not leave the Harbors alone; even with their attack and improved hit points, they can be outranged by many naval units. It is advisable to support them with siege units on the shore and other kind of fortified buildings such as Towers or Castles. Also, having a navy defending the Harbors helps to defend the shore.

When playing team games, Harbors are also highly valuable, as the naval trade routes can be secured a bit more easily, as they provide coverfire to Trade Cogs that approach. So when trading on water, it is usually safer to choose a Malay (if available) as a trade partner.

Harbors may only be built in shallow water or on shallows, next to the coast. In amphibious maps, this can be taken into great advantage, by placing Harbors in strategic spots where both naval and land units converge, preferably adjacently to a forest, so that less units have the chance to damage it, while also shocking units with Demolition Ships.

Even in maps with lower-than-average water, such as Cenotes, one may take advantage of Harbors to project power and act as a deterrent to nearby enemy Villagers.

As Harbors are unique to the Malay, the Malay Dock technology tree is shown here. When a Harbor is converted, the trainable units and researchable technologies naturally change to the available pool of the new owner's civilization.

Clicking on the icon links to the corresponding page.
Blue: Units
Green: Technologies

As Harbors are unique to the Malay, only technologies that are available to them are shown in the following table: 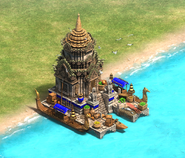 Harbor in the Definitive Edition
Español
Community content is available under CC-BY-SA unless otherwise noted.
Advertisement