Age of Empires Series Wiki
Register
Don't have an account?
Sign In
Advertisement
in: Age of Empires III, Fortress Age, Artillery,
and 3 more

The Hand Mortar is an artillery in Age of Empires III: The Asian Dynasties that is unique to the Chinese and can be trained at the Castle once the Fortress Age is reached or (prior to the Definitive Edition) as part of the Mongolian Army. It is a weak but very cheap artillery that only takes up one population.

The Hand Mortar has a high ranged resistance and it complements it with a bonus against artillery. They also out-range most artillery, with exception of the Mortar, Morutaru, and the Culverin (which has equal range), and most other units. It is a relatively weak artillery unit and deals a base damage of 5 points per shot, but has large multipliers against buildings, ships and artillery.

The Hand Mortar is ineffective against all forms of infantry and cavalry, and should not be left exposed. However, it is difficult to destroy by shelling, and with its low cost, it is an effective "meat shield" to protect the Chinese army, which is usually massed in large numbers, from enemy artillery fire. Due to its mediocre range compared to other mortars, it should be positioned outside a city's fortifications and attached to a Territorial or Old Han Army.

The Hand Mortar is best used in massed numbers against buildings, ships or other artillery. When positioned at the flanks, the Hand Mortar should be guarded by infantry or cavalry. 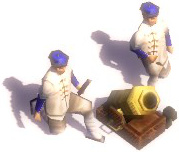 A Hand Mortar in Bombard mode 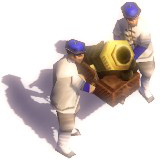 A Hand Mortar in Limber mode

A Chinese gun similar to hand mortar, from Yuan dynasty, 1332. It is called a 碗口铳 (Wǎn kǒu chòng) or bowl-mouthed gun.
Community content is available under CC-BY-SA unless otherwise noted.
Advertisement