The Hand Cannoneer is a gunpowder unit in Age of Empires II that can be trained at the Archery Range once the Imperial Age is reached and Chemistry is researched. It has a powerful attack, but low hit points and low accuracy at range.

The * indicates that the civilization can fully upgrade their Hand Cannoneers, i.e. gets Ring Archer Armor. Faith and Heresy are not taken into account because they only contribute to their combat strength in a very situational manner.

The ^ indicates that the civilization has at least one civilization or team bonus or a unique technology that benefits the combat strength of the Hand Cannoneer.

Only Burgundians, Franks and Gurjaras lack fully upgraded Hand Cannoneers, due to lacking Ring Archer Armor (but it does not weaken Hand Cannoneers very much).

Hand Cannoneers have a powerful attack but have a slow firing rate, and their shots fly off in random directions (within radial proximity to the vector leading to their target), so their accuracy at long range is poor. They do +10 bonus damage against infantry (except the Condottiero) and another +1 against Spearmen, and their accuracy is less of a problem against the larger cavalry, making them deadly at close range. If maneuvered properly, Hand Cannoneers may also take down siege weapons with great efficiency but Onagers can still pose a threat to them due to their range.

Hand Cannoneers are treated to be archers (even though they use firearms) for purposes of attack bonuses, so Skirmishers, Ghulams, and Huskarls have attack bonuses against them, and Huskarls also have a high defensive bonus against their piercing damage. They are of course also gunpowder units, giving Condottieri and Winged Hussars attack bonuses against them as well. Being foot units with low hit points, they are also vulnerable to Mangonels and Scorpions, and they perform poorly against towers and Castles. The food cost of Hand Cannoneers also makes them odd to work with, so special situations or builds are needed in order to use them appropriately, like a Fast Imperial strategy (in closed maps). 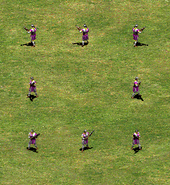 A group of Hand Cannoneers

Their weapon, a surviving hand cannon from the Chinese Yuan dynasty 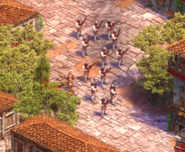 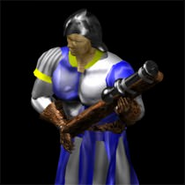 A render of the original Hand Cannoneer model

Sprite from the Definitive Edition.