The Halberdier is an infantry unit in Age of Empires II: The Conquerors that can be trained at the Barracks upon reaching the Imperial Age. An upgrade of the Pikeman, it has a huge attack bonus against cavalry, particularly elephants.

Halberdiers are weak against almost any units outside the cavalry class, but make up for it by being one of the cheapest military units in the game. Additionally, no gold is required to train them, making them trash units.

The * indicates that the civilization can fully upgrade their Halberdiers, i.e. gets Blast Furnace, Plate Mail Armor, and Squires. Faith and Heresy are not taken into account because they only contribute to their combat strength in a very situational manner.

The ^ indicates that the civilization has at least one civilization or team bonus or a unique technology that benefits the combat strength of the Halberdier.

Like its predecessor, the Pikeman, the main purpose of the Halberdier is countering cavalry units. With 32, their attack bonus against cavalry is so huge that two Halberdiers can bring down even a Paladin. They can be paired with siege units and protect them from melee cavalry attacks. They become a lot more valuable in the late Imperial Age since at that time gold is usually running very low, often resulting in trash wars. There, Halberdiers hold advantage against the Hussar, the Magyar Huszar, and they even are valuable against Skirmishers despite the fact that Skirmishers deal bonus damage to them, because they have a minimum range the Halberdiers can exploit. Genitours also receive huge bonus damage from Halberdiers, but they can hit-and-run them, probably making them the best choice against Halberdiers in trash wars.

Halberdiers need to be massed in order to be effective, but they are cost effective against all cavalry units, even Cataphracts. Ranged cavalry like Cavalry Archers or certain unique units like the Mameluke can handle them, though, when micromanaged properly.

The Spearman line, with the Halberdier on the right.

The Spearman line, with the Halberdier on the right. In the Definitive Edition. 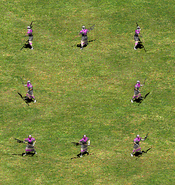 A group of Halberdiers

A 3D model of a real-life Halberdier

Halberdiers in the Definitive Edition

A render of the Halberdier model