The Hakkapelit is a heavy cavalry in Age of Empires III: Definitive Edition that is unique to the Swedes and can be trained at the Stable, Fort, and Galleon. It is a very powerful but frail melee cavalry who can also attack from short ranges with a carbine.

The Hakkapelit is a heavy cavalry that is similar to the German Uhlan in terms of hit points and melee attack. They do, however, have a ranged attack that is very powerful, but with a short range. This makes them the only heavy cavalry in the game that has a ranged attack, aside from Harquebusiers, which are mercenaries, and Rifle Riders, which have both heavy cavalry and light cavalry tags. It is possible to access Hakkapelits in the Commerce Age by sending the "March of the Hakkapelits" Home City Card, which converts all Hussars into Hakkapelits.

Their ranged attack is very lethal, due to high base damage and quick rate of fire, and also has an area of effect. Due to the inadequate range, they have an inability to run-and-shoot (kite), unlike most ranged cavalry units such as Dragoons. Their ranged attack does reasonably well against Heavy Infantry, especially ranged units such as Musketeers. They also have a very strong melee attack, which can be used to charge against Rifle Infantry and artillery, and also to raid villagers effectively.

Much like their Uhlan counterpart, their hitpoints are very low. This makes them less versatile when compared to Hussars. Hakkapelits are trainable from the Fortress Age, where most Dragoon type units are also available, and they simply get hard countered by them. Hakkapelits are more effective when combined with Hussars with all upgrade cards sent, where one unit can be a damage dealer and the other unit can soak damage from enemy units. Their range can be upgraded by researching Ranged Cavalry Caracole and also by sending the "Snaplock" and "TEAM Ranged Cavalry Combat" cards.

The Hakkapelit starts as Veteran, which gives them +20% hit points and attack.

If they are made available in the Commerce Age with the "March of the Hakkapelits" Home City Card, Hakkapelits will be automatically upgraded to Veteran once the player reaches the Fortress Age.

As Hakkapelits are unique to the Swedes, only technologies that they have access to are shown in the following table:

As Hakkapelits are unique to the Swedes, only their cards and other civilizations' TEAM cards are shown in the following tables:

Unlike the rest of the Swedish units, it speaks Finnish using the same dialogue files as the Hackapell.

Hakkapelit image from the Compendium section 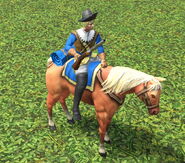 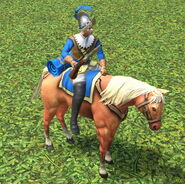 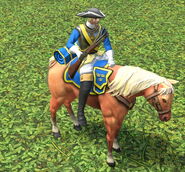 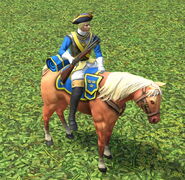