The Hajduk is a European outlaw in Age of Empires III: Definitive Edition - Knights of the Mediterranean. It is available on the Anatolia, Balkan Mountains, Budapest, Carpathans, Dnieper Basin, Hungarian Plains, Lithuania, Pripet Marshes, Vistula Basin and Wallachia maps.

The Hajduk is an Outlaw armed with a rifle. As an outlaw, it costs little coin, but takes more population spaces than other infantry units.

Hajduks are effective against light infantry units (like foot archers and Skirmishers) due to a multiplier, and slightly effective against heavy infantry. However, they are more useful in the Commerce Age and become weaker in later Ages, as mercenaries like the Pandour or the Mounted Rifleman will outclass them. Italians can train Schiavoni from the Basilica, who are trained in batches of seven, have higher stats, and benefit from Home City Cards or upgrades, making them a better choice over Hajduks.

Since update 13.9057, Hajduks can be obtained after revolting to Hungary or Romania. For the Maltese, every existing and new constructed outpost spawns a Hajduk after revolting; additionally, each civilization that revolts to Hungary or Romania can send the "Hajduks" shipment, which spawns a Hajduk in all existing Outposts and Blockhouses and also enables their creation in the Tavern, Barracks, Fort, Galleon, and Outpost (Blockhouse for the Russians).

The Fencing School card is not available to Chinese, Japanese, Ottomans and Spanish.

The Hajduk speaks Romanian, an Eastern Romance language related to others that evolved from Latin language, which is also spoken by the Boyar.

Hajduk image from the Compendium section 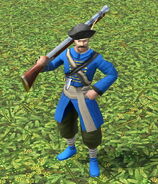 An in-game Hajduk
Community content is available under CC-BY-SA unless otherwise noted.
Advertisement