Hack (99%)
Pierce (99%)
Crush (99%)
A Hades Gate is a giant doorway found in some campaign scenarios of Age of Mythology and its expansions.

After defeating Kronos and the Titans, Zeus had them imprisoned in Tartarus, the deepest part of the Underworld. To ensure that they could not escape, all the paths into Tartarus were sealed by giant adamantine doors. Only a mortal capable of entering the Underworld can break open the massive construct, but even this is extremely difficult.

Fall of the Trident Edit

After defeating the Titans, Zeus rose to power in the Greek Pantheon and became ruler of the skies. His brother Poseidon, who ruled the seas, became envious of his domain. Kronos became aware of this despite being locked away in Tartarus and promised Poseidon great power in exchange for his release. As Poseidon was immortal he could not open the doors himself. Instead, he employed Gargarensis, who was promised immortality by Kronos if he was released, in opening the Hades Gate for him. The Cyclops enslaved the people of Ioklos and had them unearth a passage to Erebus. In the scenario Revelation, Gargarensis fabricated a Giant Gate Ram to damage the first Hades Gate found in an attempt to break it open. Arkantos intervened by destroying the Ram with his army. The Cyclops retaliated by triggering an Earthquake which trapped the Atlantean admiral in Erebus while he escaped.

Gargarensis traveled to Egypt next to prepare the excavation of an Underworld Passage that presumably would have brought him to a second Hades Gate. Before he could even set foot in the Underworld, Arkantos intervened again by helping Amanra revive the Egyptian god Osiris who decimated Gargarensis’ army. Gargarensis fled to the Norselands where a third Hades Gate would be found in Nifleheim. In Beneath the Surface, he constructed a second Giant Gate Ram which Arkantos once more attempted to destroy but was forced to retreat when the Cyclops summoned numerous Fire Giants in defense. In Unlikely Heroes, it appeared Gargarensis succeeded as the damaged gate opened. However, Arkantos managed to assist the dwarf brothers Brokk and Eitri in fabricating a hammer for Thor, which was used to seal the gate once again.

The final Hades Gate was seen in A Place in My Dreams where it was not found in the Underworld but under the very soil of Atlantis. After Gargarensis arrived on the island and captured most of its citizens, Poseidon brought a statue of himself to life and used it to reveal the gate located under the great temple. Before he was able to open it, Arkantos, now a demi-god thanks to Zeus’ blessing, defeated the Living Poseidon Statue, causing it to drop its trident onto Gargarensis, killing him and ending Poseidon’s quest for power. The sea god then sunk the island in revenge, presumably sealing the gate as well.

Ten years after the destruction of Atlantis, Kronos managed to release his Servant from Tartarus and instructed him to infiltrate the Atlanteans. This triggered a series of events where the Atlanteans destroyed many monuments and worshipers of the gods that kept the Titans trapped in Tartarus. With the influence of the gods now weakened, they were able to escape and caused great destruction. After making amends to this mistake, the Atlanteans returned to Old Atlantis in War of the Titans, where the last Hades Gate was seen still exposed but severely weakened. Kronos was able to open it from the inside and walk the earth, only to be trapped once more by Gaia.

The gates to Tartarus were fashioned by Zeus and his brothers to imprison Kronos and the other titans within. The gates are made of adamantine, a nearly unbreakable metal, and can only be opened by the hand of a mortal, insuring that no other god would release the titans...at least directly. 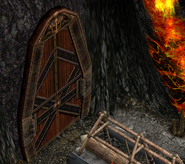 The Giant Gate Ram positioned in front of the Hades Gate in Greece. 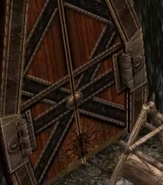 The Hades Gate, starting to show damage from the gate ram. 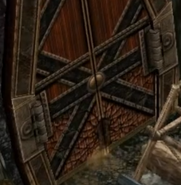 The Hades Gate, after extended pounding from the ram.

The Hades Gates in Good Advice.

The last gate found underneath Atlantis.
Add a photo to this gallery
Retrieved from "https://ageofempires.fandom.com/wiki/Hades_Gate?oldid=270058"
Community content is available under CC-BY-SA unless otherwise noted.