Age of Empires Series Wiki
Register
Don't have an account?
Sign In
Advertisement
in: Unique units, Age of Empires III, Mercenaries,
and 2 more

The Hackapell is a mercenary cavalry in Age of Empires III. Hackapells are a very delicate heavy cavalry that function as improved Uhlans.

Although Hackapells can strike with great force (they can kill Zamburaks with one hit), they should not be used on their own during battle, since their low hit points make them vulnerable to enemy attacks. They excel at raiding enemy Villagers - In two strikes, a Villager or Coureur is dead. Hackapells should be used like Hussars, but mixed with regular hand cavalry or other Heavy Cavalry mercenaries. Hackapells have significantly more attack but significantly fewer hit points than the Mameluke. With 12 Missionaries (Japanese ally), Unction, all attack improvement upgrades (Bhakti Temple) and cards (French and Indian allies), the Spanish Finnish Hackapell is the melee cavalry with the highest attack, 281.93. 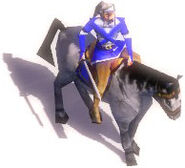