Noel Johansen
Gustavus Adolphus (1594 - 1632) is the AI personality of the Swedes in Age of Empires III: Definitive Edition. He is voiced by Noel Johansen.

As a personality, Gustavus is jovial and bombastic. He speaks with a distinct accent and is usually respectful towards the player.

Gustavus primarily uses Pikemen, Crossbowmen, Caroleans, Hussars, and Landsknechts in his army. Later in the game, he will often add Black Riders and artillery. Hakkapelits and Skirmishers may be produced in small numbers. Leather Cannons will typically appear only via shipments.

Like most other European AIs, Gustavus tends to construct one of every type of building, with the exception of additional Barracks and/or Stables. His economy is average, albeit with a slight boost due to Torps, which he often builds in a triangle formation around coin mines.

On average, Gustavus is weaker than most other AIs in the Definitive Edition, due mainly to a lack of military production. However, he is still generally stronger than Cuauhtemoc, Hiawatha, and George Washington. 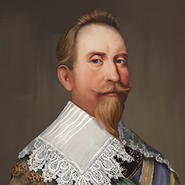