The Guard Tower is a tower in Age of Mythology. It is an upgraded version of the Watch Tower, and hence the second upgrade of the Sentry Tower. The Egyptians can further upgrade their Guard Towers to Ballista Towers in the Mythic Age.

Guard Towers are available to all civilizations except for the Norse. They defend well, but siege weapons and groups of soldiers will destroy them with ease, so it is not recommended to rely solely on towers for defense.

The Egyptians can upgrade their Guard Towers to Ballista Towers in the Mythic Age. The upgrade costs 800 wood and 500 food and takes 40 seconds to research.

"Improved towers or other fortifications might be placed at vital points like river crossings or mountain passes where enemies would be forced to pass. The garrison of the guard tower was expected to fight and defend the fortification until help could arrive, as well as warn commanders of encroachments. Because such a fortification was usually placed at a vital position, an enemy could not afford to pass it by, leaving their retreat path blocked." 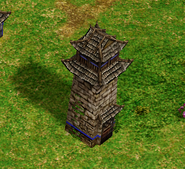 Norse Guard Tower, adapting the Egyptian architectural style, as seen in Odin's Tower.
Add a photo to this gallery
Retrieved from "https://ageofempires.fandom.com/wiki/Guard_Tower_(Age_of_Mythology)?oldid=262621"
Community content is available under CC-BY-SA unless otherwise noted.