1,800 food
900 stone
The Guard Tower is a tower in Age of Empires, the upgrade to the Sentry Tower available in the Iron Age. To research its upgrade technology at the Granary, 300 food and 100 stone is required. This defensive building has 200 hit points, 6 attack and 7 range and can be upgraded. It offers effective defense against other Bronze Age units, but needs to be upgraded to the Ballista Tower to have any kind of effectiveness against Iron Age units. Almost every civilization can build this type of tower. The only exceptions to this are the Romans, the Minoans, and the Yamato.

Like all towers, Guard Towers are more resistant against stone throwing siege weapons than other buildings, having 18 additional siege armor against them after accounting for building armor. Against Armored Elephants, Guard Towers have 16 extra armor.

Guard Tower (left) and Ballista Tower (right). Notice that their appearance are the same; however, the former fires arrows, while the latter fires Ballista bolts. 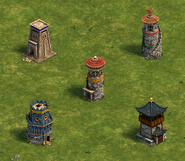 All Guard Towers in the Definitive Edition
Add a photo to this gallery
Retrieved from "https://ageofempires.fandom.com/wiki/Guard_Tower_(Age_of_Empires)?oldid=326144"
Community content is available under CC-BY-SA unless otherwise noted.