1.5
The Grizzly Bear is a large carnivore Treasure Guardian featured in Age of Empires III. They have a size of about 8 feet, and are found on many North American maps along with its smaller cousin the Black Bear.

Grizzly Bears are one of the strongest Treasure Guardians, second in the original game only to the Polar Bear, and with The Asian Dynasties expansion installed, third to the Rhinoceros. 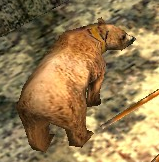 Honcho the the Pet Grizzly Bear

1.5
Honcho the Pet Grizzly Bear is a pet Grizzly Bear in Age of Empires III. He is one one the strongest pets in the game, as is capable of inflicting a fair amount of damage against Treasure Guardians, though he is incapable of delivering heavy damage to Settlers. Honcho is tied with Randy the Pet Rhino for the most damaging attack among pets. Honcho can be rescued from Treasures on certain maps such as California and Great Plains.