The Great Wall is a Chinese wall in Age of Mythology: Tale of the Dragon. It is an upgrade of the Fortified Wall and the final wall for the Chinese. It is the toughest wall in the game, surpassing the Atlantean Orichalkos Wall by 100, and the Egyptian Citadel Wall by 200 hit points.

"The Great Wall of China originally began as a series of separate fortifications that were later joined and further improved. Their main purpose was to protect the states of China against nomadic raids and invasions from the Eurasian Steppe. As the walls were made of various materials including stone, brick, wood, and earth, and had to withstand both the test of time and numerous hostilities, the Great Wall had to continue to be rebuilt and enhanced for centuries."
—In-game help section 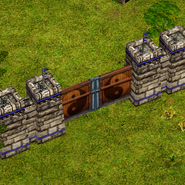 A Great Gate
Add a photo to this gallery
Retrieved from "https://ageofempires.fandom.com/wiki/Great_Wall_(Age_of_Mythology)?oldid=261946"
Community content is available under CC-BY-SA unless otherwise noted.