Age of Empires Series Wiki
Register
Don't have an account?
Sign In
Advertisement
in: Articles needing an image, Article stubs, Age of Empires III,
and 3 more

The Great Northern War is a historical map released with Age of Empires III: Definitive Edition - Knights of the Mediterranean.

Players starts with a Command Post instead of a Town Center. It can train Military Wagons and features four special technologies:

Players also starts with a Trading Post among a walled outpost with some tents. 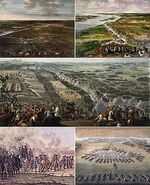 Decisive Russian victory at Poltava in 1709

Timeline of each main participant in the war
Community content is available under CC-BY-SA unless otherwise noted.
Advertisement