"Casts the Informers spell which reveals the enemy's positions to you."
—In-game description

The Great Buddha is a wonder in Age of Empires III: The Asian Dynasties that is unique to the Japanese and can be built to advance into the next Age. It sends a shipment of Naginata Riders when built and allows the use of Informers to temporarily see enemy LOS.

"You have sent informers to investigate the enemy."
—Message when Informers is used

"[Player name] has infiltrated your enemy's ranks with Informers and now knows all that they do."
—Message when an ally uses Informers

"[Player name] has infiltrated your ranks with Informers and now knows all that you do."
—Message when an enemy uses Informers

Informers: Allows the player to see what their enemies can see for 10 seconds. 300 seconds cooldown.

Informers functions similarly to the Spies technology researched in the Imperial Age, but only lasts for a short time. Despite this, the ability can be invaluable in the earlier stages of the game, so it is recommended for the player to build the Great Buddha early on.

As the Great Buddha is unique to the Japanese, only technologies that they have access to are shown in the following table:

As the Great Buddha is unique to the Japanese, only their cards and other civilizations' TEAM cards are shown in the following tables:

"The renowned Great Buddha, or “daibutsu,” is a giant bronze statue of the enlightened Amida Buddha located in Kamakura of the Kanagawa Prefecture in Japan. The statue itself is hollow and sits on the former site of the Kotokuin temple that once housed it. Sculpted by Tanji-Hisatomo and One-Goroemon and weighing 125 tons, it is commonly held that the statue was constructed in 1252 at the behest of the priest Joko.

With a height of nearly 45 feet, it is the second largest Buddha in Japan. The statue took more than a dozen years to complete after its first wooden iteration in 1243. A unique element of the Great Buddha’s history is that its construction was funded entirely by donations from faithful devotees and received no assistance from any governments or official sources.

The Great Buddha of Kamakura is an iconic reference of the influence of Buddhist faith on Japanese culture, and is a celebrated landmark of Japan from the era of the Kamakura shogunate." 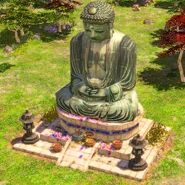 The Great Buddha as it appears in-game

A photo of the Great Buddha of Kamakura in Japan

Promotional art displaying the Great Buddha
Add a photo to this gallery
Retrieved from "https://ageofempires.fandom.com/wiki/Great_Buddha?oldid=284996"
Community content is available under CC-BY-SA unless otherwise noted.