Age of Empires Series Wiki
Register
Don't have an account?
Sign In
Advertisement
in: Unique units, Age of Empires III, Artillery,
and 3 more

The Great Bombard is an artillery unit in Age of Empires III that is unique to the Ottomans, which replaces the Heavy Cannon, and can only be trained at the Factory or shipped from the Home City.

The Great Bombard is a slow and heavy unique artillery piece used by the Ottoman Empire, which can only be created by Ottoman factories or sent from the Home City. The Great Bombard has a giant damage output, shredding any infantry it encounters on the way with just two of them. The Great Bombard is also excellent at taking out enemy buildings with this extremely high damage. They also have a relatively high amount of hit points.

However, the Great Bombard does have its own disadvantages. Being the largest (and heaviest) artillery in-game, they are extremely slow when moving and will need protection against surprise rushes against the Bombard. They also have a relatively slow firing rate compared to the Heavy Cannon and Rocket from other civilizations.

Training the Great Bombard at a Factory takes 115 seconds (109.25 with Chinese TEAM Engineering School card, 103.5 with Engineering School card and 97.75 with both). The average resource gather rate of a Factory is 5.5 every second (before the Factory improvements (+20%)). This means that the Great Bombard, while appearing to be free, will have a cost dependent upon how effective the Factory gathers a needed resource. In many cases, this cost can exceed the base value of the unit.

As Great Bombards are unique to the Ottomans, only technologies that they have access to are shown in the following table:

As Great Bombards are unique to the Ottomans, only their cards and other civilizations' TEAM cards that are shown on the following tables: 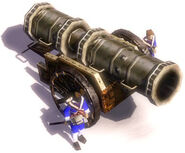 A Great Bombard in Bombard mode

A Great Bombard in Limber mode

The Dardanelles Gun, which the Great Bombard is based on

An army of Great Bombards is a force to be reckoned with.
Community content is available under CC-BY-SA unless otherwise noted.
Advertisement