Age of Empires Series Wiki
Register
Don't have an account?
Sign In
Advertisement
in: Age of Mythology, Archaic Age, Egyptian buildings,
and 2 more

400
The Granary is an economic building in Age of Mythology that functions as a drop site for all types of food gathered on land (farmed, herded, and hunted). It is also where technologies that improve these methods of food production are researched. It is available to the Greeks and Egyptians in the Archaic Age; it costs 50 wood to the Greeks but is free to the Egyptians.

The Granary represents the place where agricultural societies stored their grain surpluses so food would be available during the winter months. It might be a large brick or stone silo, or a building sheltering smaller jars or barrels of grain. Without proper storage, grain would spoil and the farmers would have to resume nomadic hunting and gathering to avoid starvation before the next harvest. 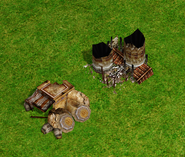