Age of Empires Series Wiki
Register
Don't have an account?
Sign In
Advertisement
in: Age of Empires II, The African Kingdoms, Civilian buildings

6
The Granary is an unconstructable building in Age of Empires II HD: The African Kingdoms. It is only available only in the Scenario Editor (under the Other tab). Despite making the same sound as a Mill when selecting it, it serves merely decorative purposes. Granaries can be rotated in the Scenario Editor and come in five different forms.

Granaries are apparently not properly coded as they don't even have an icon or any assigned armor. Also, they take high bonus damages from some units that don't even have attack bonuses against buildings, such as Archers or Eagle Warriors. 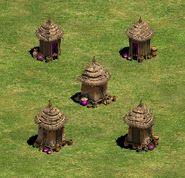