Myth units (2)
Heroes (50%)
The Golem is a Greek myth unit that was cut from Age of Mythology before the end of 2001, but was later added with the Tale of the Dragon expansion.

Although they were added with Age of Mythology: Tale of the Dragon, the Golem is hidden, to re-enable the Golem for Scenario Editor usage, one must look for and remove the <flag>NotPlayerPlaceable</flag> under its definition in the Proto XML file.

"That guy is gone. We didn't really like him. The niche was filled by a similar unit."
— Greg Street, Lead Designer

That unit that replaced the golem would eventually be revealed to be the Colossus.

Golem shown with some other units that were changed/cut

Golem from the first released information on AoM from CGW #203.

Golem seen from another angle. 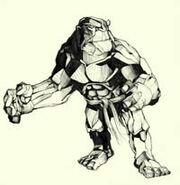 Golem concept art
Add a photo to this gallery

Retrieved from "https://ageofempires.fandom.com/wiki/Golem?oldid=279746"
Community content is available under CC-BY-SA unless otherwise noted.